Rain Felkl is a 2022 CalTopo Adventure Grant recipient. Along with three partners, she attempted to ski traverse the Lyngen Alps in Norway in late April. They also identified possible side trips for additional ski descents along the way. Below is her trip report- enjoy!

Our team of 4 – Clay James, Lisa LaCampange, Freddy Mondale and myself set out to complete the Lyngen Alps Traverse and with research beforehand we mapped out multiple ski objectives along the route.

Freddy and Lisa had recently moved to Zurich, Switzerland so it was helpful to use a shared CalTopo map for all four of us to add potential routes, ski lines and campsites as we read through the guide books. By using a shared CalTopo map, everyone could view the map and newly added objectives on their own schedule. To learn more about how to share and collaborate on the same map with your partners, check out the Map Sharing page in the CalTopo user guide.

Although we planned to tent camp for the entire route we mapped out the location of huts as shown in the map below. These are first come, first serve backcountry huts throughout the alps. They were much lower in elevation than our planned traverse route, however, a good escape option if weather were to come in. These huts came in handy and I was happy we took the time to map their locations beforehand. 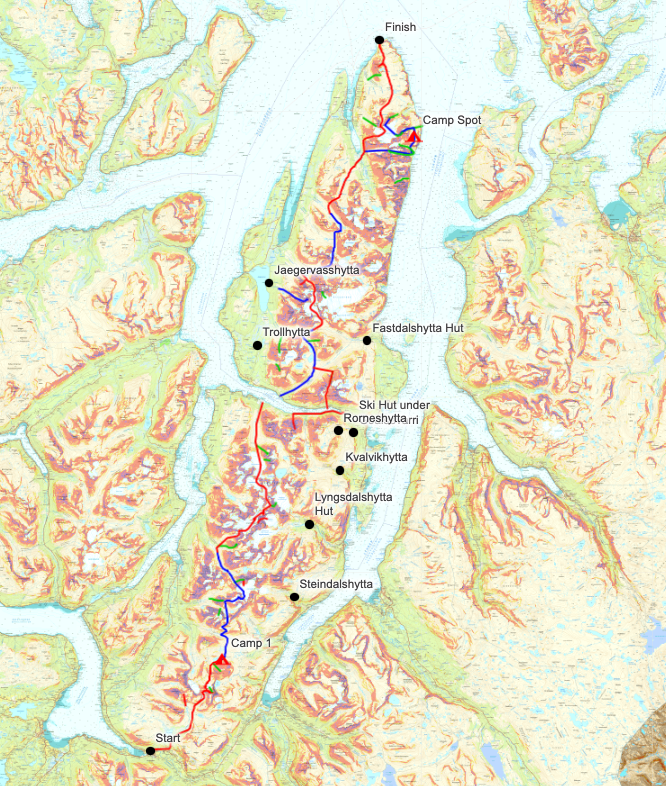 We were going to complete the traverse in two legs taking about a week each with the ski objectives, the south side first and the north side second. In between the legs we would take a restock and rest day in the town of Lyngseidet.

Once we arrived in Tromso the weather forecast was looking grim. The 10 day forecast consisted of mostly new snow and wind. We opted to give it a shot anyway knowing there are a handful of drainages to exit along the route. 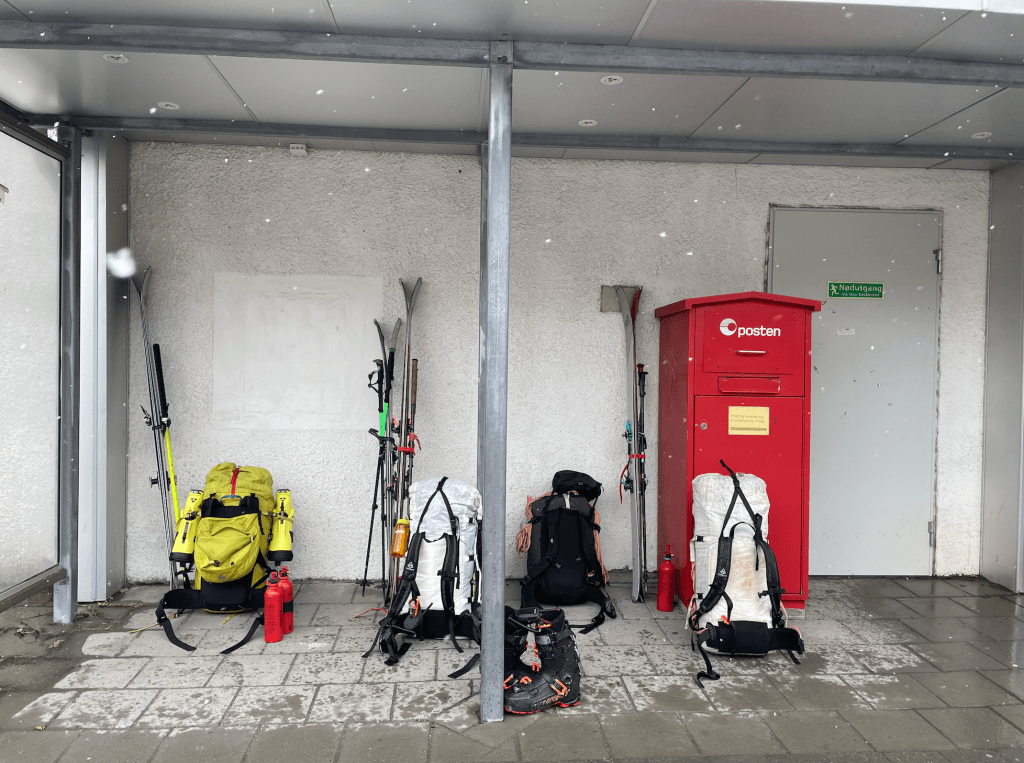 Bus stop to the start of the traverse. Photo by Rain Felkl.

Once we hit the high alpine on the first day it was white out and we continued forward navigating through until our first camp. That night it snowed a foot and winds were higher than forecasted. We checked the weather religiously that morning with no hope in sight for the foreseeable 10 days and the storm worsened for the next 4 days. We decided to swap our heavy packs and dehydrated meals for lower elevation tree skiing from the multiple backcountry ski huts within the Alps. 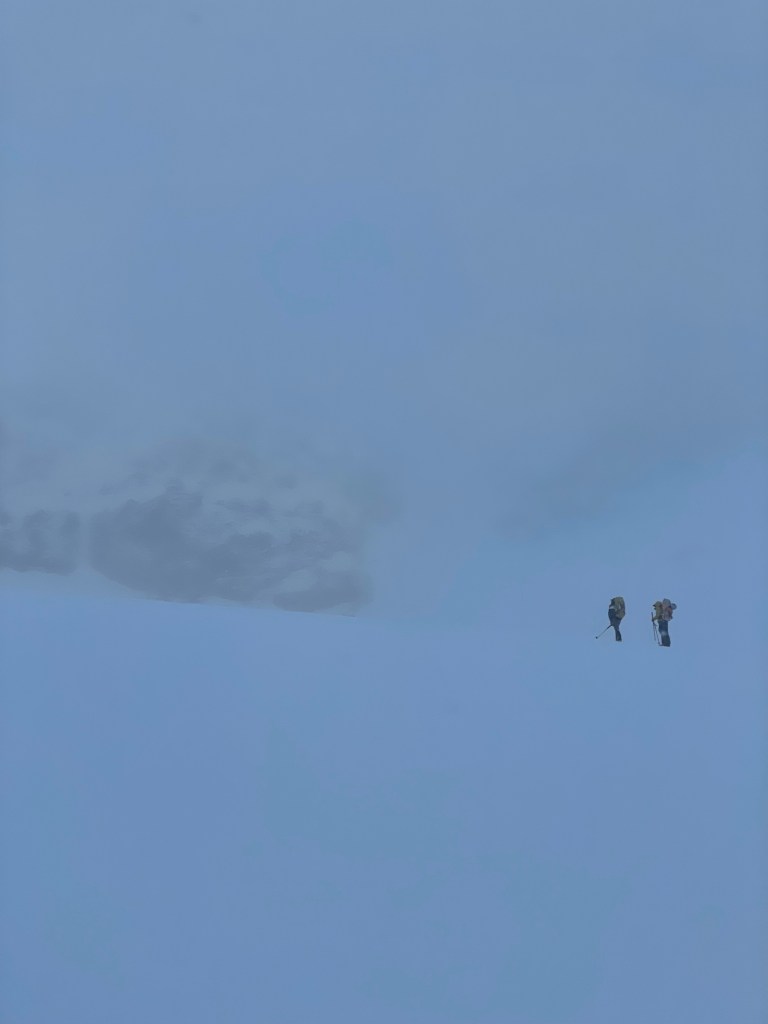 Low vis on day one. Photo by Rain Felkl.

Once we exited we caught the bus and made our way to the Magic Mountain Lodge in Lyngseidet. Freddy had stayed there a couple years back and knew it was an incredible location and place to stay for ski access complete with the friendly owners Patrik and Henrika. From here, we calculated our next moves. Regardless, we were going to be riders of the storm. 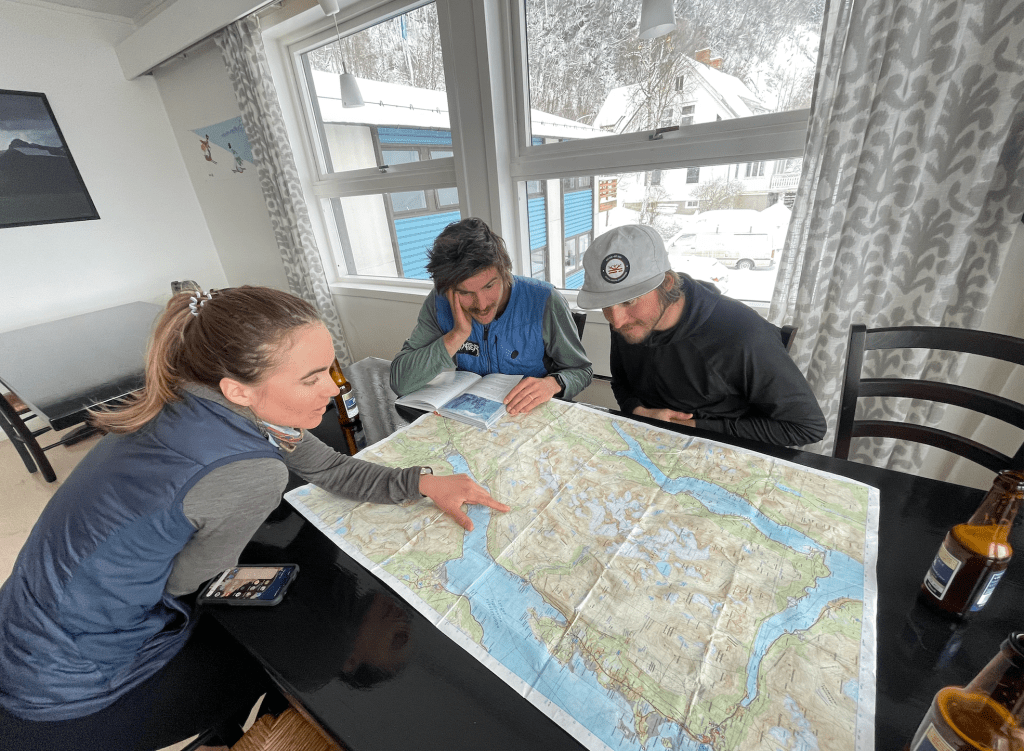 Next moves. Photo by Rain Felkl.

We decided on a ski hut with great access to trees for visibility, Kvalvikhytta. We made the hut home for the next four days surfing all the fresh powder! Our entire stay no one else came to stay in the hut, although we had two parties come in to warm up after a day trip up the drainage to ski. The hut caretaker told us to make it to the high pole he pointed out on a map and that the ski down from there was some of his favorite terrain during a storm, so naturally we made it to the pole. Great riding! 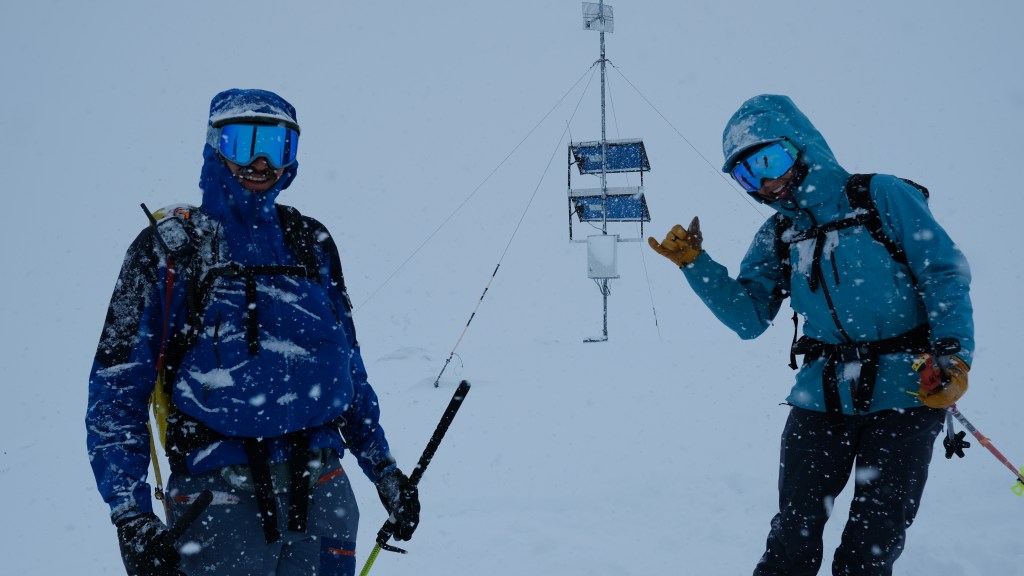 Fred and Lisa at the pole. Photo by Clay James.

After our stay at Kvalvikhytta, we traversed under Kavringtinden peak and Goalservarri peak back to Lyngseidet for a restock on food. That evening we caught the bus to our next drainage, staying at the Steindalhytta. The terrain around Steindalhytta had trees, beautiful large avalanche paths and access to Steindalsbreen glacier which led to large alpine peaks like Imagáisi and Nállangáisi. It seemed as though there could be a break in weather within the next couple of days so we wanted to set ourselves up in a position to access larger peaks if the weather did break.

As the storm continued we rode the glorious avalanche paths lined with trees and blanked in fresh new powder. One morning the weather was clear and we were ready. We rode a remarkable south facing couloir, then headed out to the glacier to potentially ride the NE face of Imagáisi. As we wandered up the glacier the clouds began to roll in once again, visibility rapidly decreased and the snow and wind began again. We descended the glacier back to the hut without riding Imagáisi. It was glorious to get up higher and finally get a view of potential terrain. 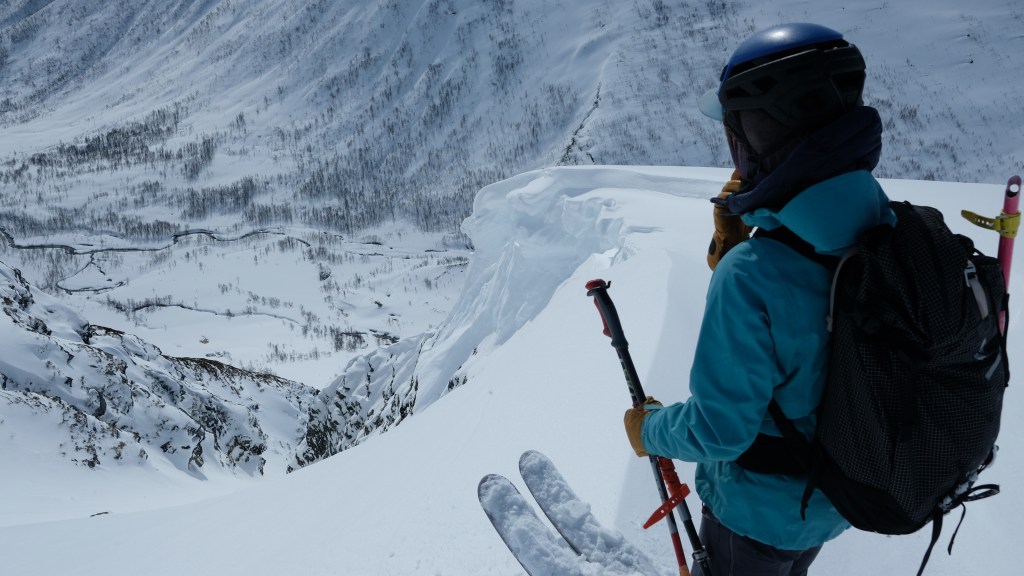 After a couple days exploring the terrain around Steindalhytta, we exited to catch the bus back to our base in Lyngseidet at the Magic Mountain Lodge. From there we explored more terrain around various backcountry huts cross referencing CalTopo maps and Lyngen guide books for our next zone. With only a few days left in our trip and the weather windows being at very odd times of the night, we figured the best option would be to be flexible and stay in Lyngseidet and rent a vehicle instead of relying on the bus schedule.

With the snow continuing to fall we heard of a unique tree skiing zone in Tamok so we decided to take the bus/ferry to Tromso, rent a car and stop in Tamok to ride on our way back to Lyngseidet. Once we arrived, we realized the Øksehøgget Couloir was in the area. We decided to go give it a look and potentially ride it bottom up. No dice on the couloir as the wind picked up rapidly. It was a beautiful feature to come back to in the future. 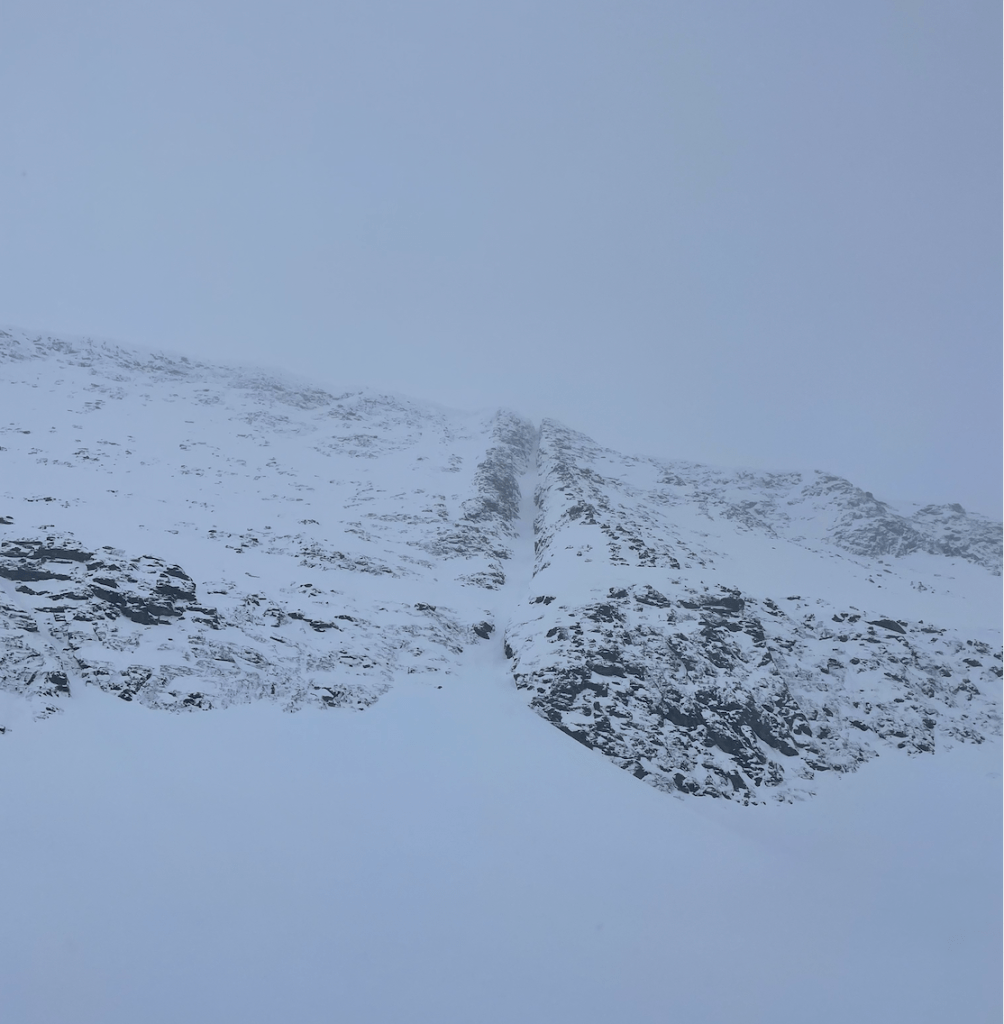 Finally the late night weather window we had been waiting for appeared in the forecast and we were ready! We decided on Ellendaltinden’s inspiring west couloir. Since the sun wasn’t setting in Northern Norway at this time we really didn’t have a time limit and began walking at 3PM. The snow was pristine and deep. Lucky for us Patrick let us borrow his homemade verts before we left that evening. They were made with shovel blades and vollie straps, these saved our energy and worked fantastic. We swapped leads setting the 700 meter boot pack. We stopped just shy of the summit due to a hard wind slab formation. I had the best conditions and ride of the season surfing down Ellendaltinden. 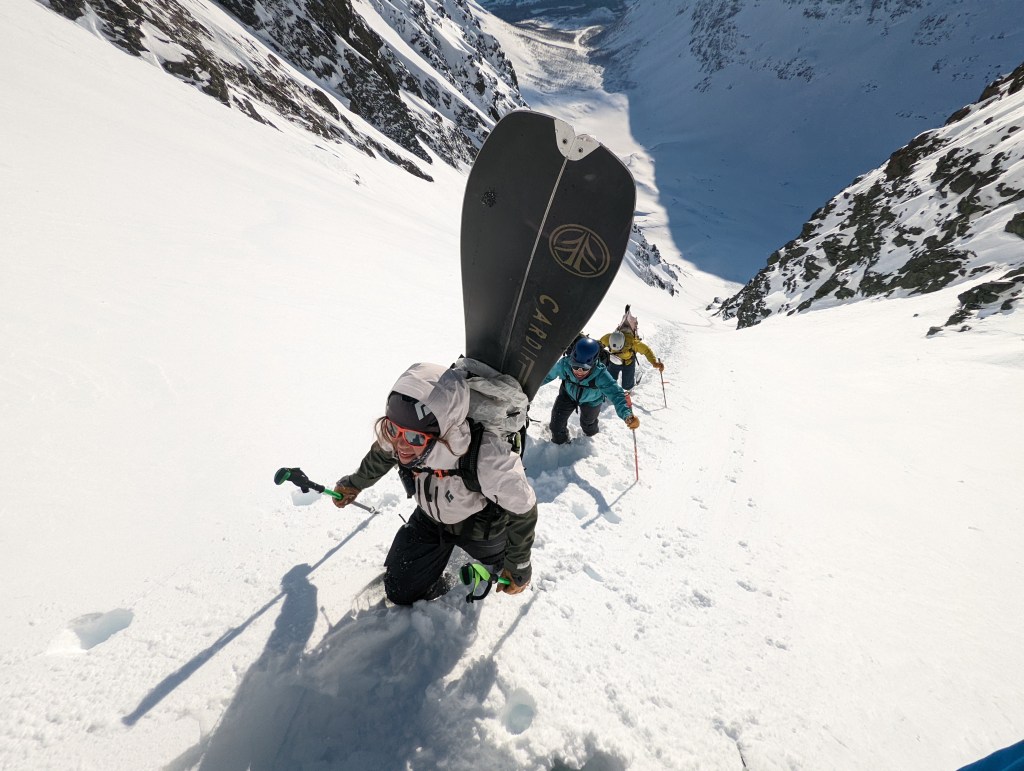 It was 2am when we arrived back at the magic mountain lodge, Freddy and Lisa went out for another ski around Goalsevarri while Clay and I went to rest. Our final day was clear but temps were high and there was no refreeze overnight, we tip-toed checking out a final zone out of Koppangen and didn’t get too far until the heat became overbearing.

The following day we left back to Tromso to collect our excess luggage we left at a hotel and spend the final night repacking before the flight. We hit the town and met some locals who had nothing but great things to say about Northern Norway and the access to inspiring terrain looking over the endless fjords. We are thrilled to make our way back to this land and give the traverse another shot when weather allows. 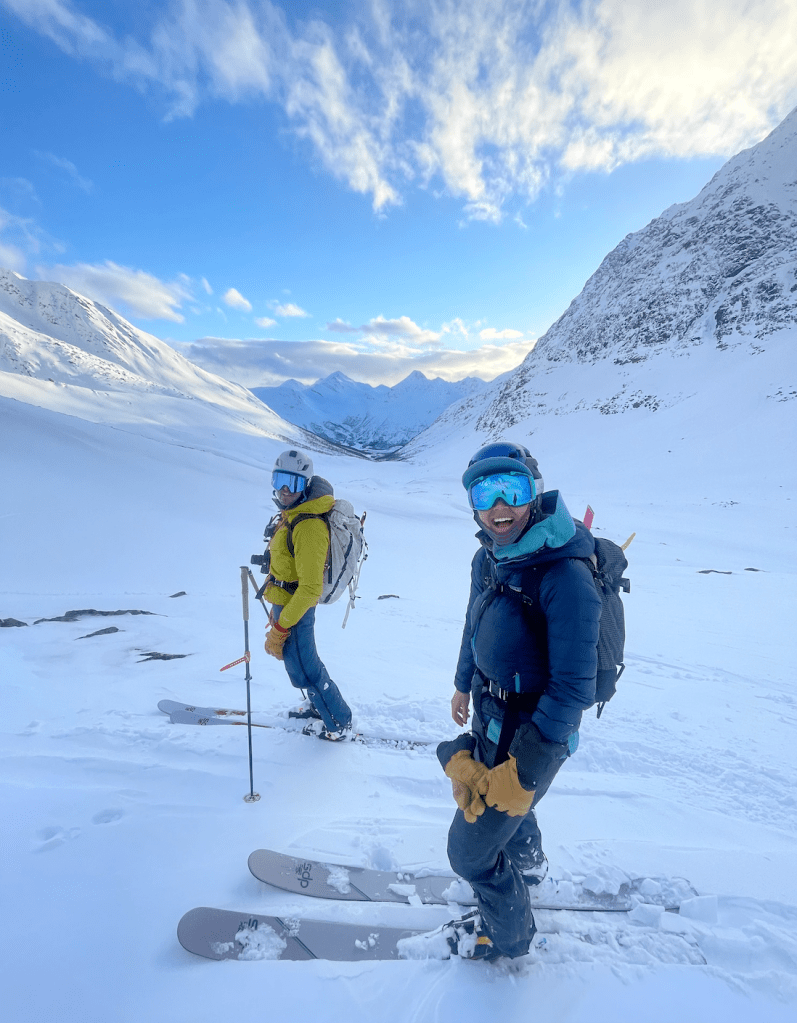 Rain and her team used CalTopo’s international base layers to plan their ski traverse and objectives. CalTopo offers worldwide coverage for the MapBuilder Topo, MapBuilder Hybrid and Global Imagery base layers as well as more limited international coverage for Scanned Topos. These layers can be downloaded for offline use on your mobile device with a mobile, pro or desktop subscription. Visit our Individual Accounts page to learn more about the features and pricing of CalTopo’s individual subscriptions.

Want to join the discussion?
Feel free to contribute!